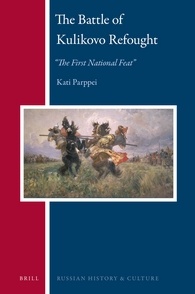 My book ”The Battle of Kulikovo Refought – ’The First National Feat'” has been published by Brill Academic Publishers.

The battle of Kulikovo, fought between Muscovite and Tatar troops in 1380, has been considered as a crucial turning point in the national history of Russia. In The Battle of Kulikovo Refought Kati Parppei examines the layers of contemporary meanings attached to the event from the Middle Ages to the present, following the formation and establishment of the collective images and perceptions concerning the battle.

By utilizing a diverse set of sources Kati Parppei shows that the present image of the medieval battle was created in retrospect from the 15th century onwards by interpolating, interpreting and simplifying. The narrative themes emphasizing internal unity have been applicable to practically any political situation over the centuries, especially to ones involving external threat.

Kirjaa voit tilata ja lisäinfoa lukea täältä. / You can order the book and find more information about it here.